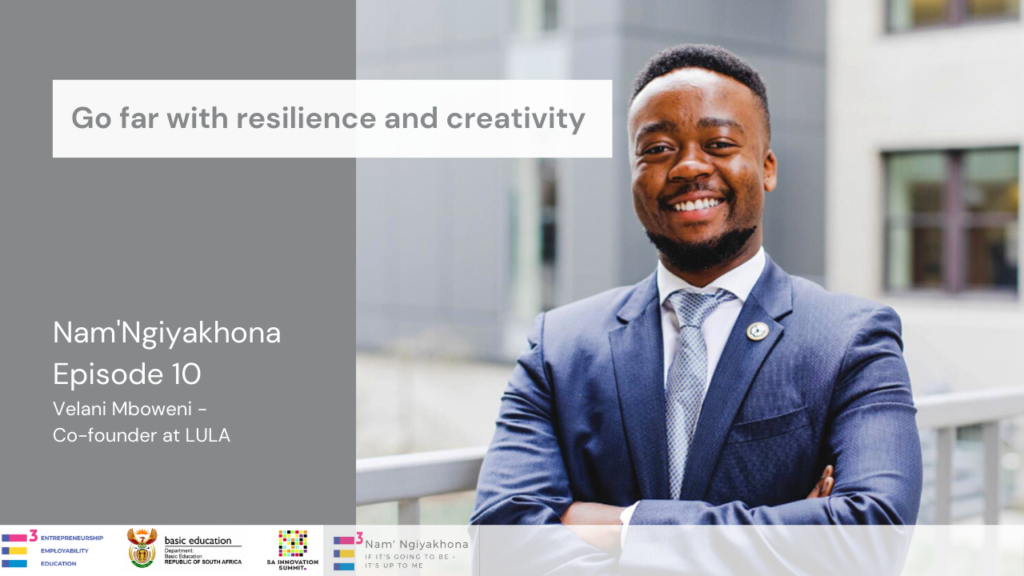 Nam’Ngiyakhona Podcast Episode 10: If it’s going to be – it’s up to me.

Nam’Ngiyakhona is the podcast by the E-cubed Initiative of the Department of Education, that is inspiring young people in South Africa to be entrepreneurial. Creating millennial entrepreneurs, the entrepreneurials!

What does it mean to be entrepreneurial? We bring you incredible young people from across the country that are innovating, impacting, and disrupting their space for a better country and world. They are entrepreneurs, corporate leaders, entertainers and academic trailblazers and they are here to share their journey and tell us how they have been entrepreneurial.

In this episode we have Velani Mboweni – Co-founder at LULA. LULA is a carpool platform that helps corporations by connecting their employees who are commuting on similar routes. The company is transforming the way people commute by leveraging on the shared economy and mobile technology.

Mboweni holds a Bachelor of Commerce in Philosophy, Politics & Economics from the University of Cape Town, and Postgraduate Diploma in Business Administration from Wits Business School. As of 2017, he serves as the Commissioner for HR, Science, Technology & Innovation at the African Youth Commission.

He has worked in South Africa and the United States of America across industries including financial services, chemicals, payments, and the social sector. He co-founded the social venture, Phambili Mzansi to connect young and old with resources and a network to solve Africa’s pertinent issues. Furthermore, he is a 2014 Alumni of the South Africa-Washington International Program and as one of the world’s top entrepreneurs under 25. Velani is a Global Fellow at The Kairos Society (San Francisco, CA). He is a TedX speaker and been recognised by Mail and Guardian as South Africa’s top 200 young South Africans.

This website uses cookies to improve your experience while you navigate through the website. Out of these, the cookies that are categorized as necessary are stored on your browser as they are essential for the working of basic functionalities of the website. We also use third-party cookies that help us analyze and understand how you use this website. These cookies will be stored in your browser only with your consent. You also have the option to opt-out of these cookies. But opting out of some of these cookies may affect your browsing experience.
Necessary Always Enabled
Necessary cookies are absolutely essential for the website to function properly. These cookies ensure basic functionalities and security features of the website, anonymously.
Functional
Functional cookies help to perform certain functionalities like sharing the content of the website on social media platforms, collect feedbacks, and other third-party features.
Performance
Performance cookies are used to understand and analyze the key performance indexes of the website which helps in delivering a better user experience for the visitors.
Analytics
Analytical cookies are used to understand how visitors interact with the website. These cookies help provide information on metrics the number of visitors, bounce rate, traffic source, etc.
Advertisement
Advertisement cookies are used to provide visitors with relevant ads and marketing campaigns. These cookies track visitors across websites and collect information to provide customized ads.
Others
Other uncategorized cookies are those that are being analyzed and have not been classified into a category as yet.
SAVE & ACCEPT
Scroll Up